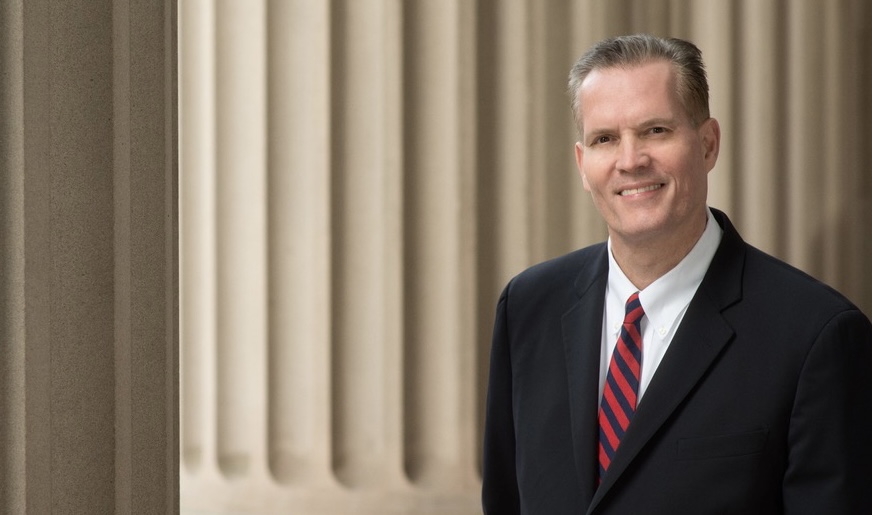 “It’s a scene ripped from the pages of a legal thriller: the tough, tall, good-looking prosecutor making his closing argument in a murder trial. One look at the jury and you know he owns them as he dissects the defendant’s lies.

He gives them the real story: the truth about who started the fight, who brought the gun, the truthfulness-or lack thereof-of a crack-smoking witness and, most important, the facts disclosed by wounds on the victim’s body.

“We’re going to spend 30 minutes on the defense, and when we’re done, there will be nothing left, because it’s all untrue,” says the prosecutor, and you believe him.

It could be a scene painted by a great novelist, say Scott Turow or John Grisham. Actually, it’s a real-life moment from a February trial with lawyer-novelist Mark Lindquist.”

Already a published author, Mark began his legal career in the office of the Pierce County Prosecuting Attorney. He worked his way up through the ranks, successfully litigating cases. He spent more than five years advocating for victims in the Special Assault Unit where he prosecuted sex abuse crimes.

Appointed as the District Attorney in 2009, Mark was elected in 2010, and re-elected in 2014. Throughout his public service career, he was a vigorous advocate for justice and victims.

He formed an Elder Abuse Unit that was a leader in the country. He was the first in the state to use data-driven prosecution. He filed a lawsuit against Big Pharma to hold them accountable for their role in the opioid crisis.

Mark also tried some of the most high-profile cases in Washington, including the murder and rape of Special Olympian Kimmie Daily, the murder and robbery of cab driver Mohamud Ahmed, the murder of Nancy Gardner, and the Tacoma Mall shooting.

As the elected prosecutor, he also reviewed and made decisions on more than 50 officer-involved shootings that resulted in fatalities. He brings this distinctive experience to his analysis of unlawful use of force by police.

His prior experience as a high-ranking government attorney gives him unique insights on lawsuits against the government and other large organizations such as corporations.

Mark’s firm only accepts a limited number of cases so clients receive full support and attention.

This personalized support exists throughout the process, taking pressure off clients.

Mark has won many awards, including “Outstanding Community Involvement” from Safe Streets, “The Special Pro Bono Leadership Award” from the Pierce County Tacoma Bar Association, and “Boss of the Year” from the National Association of Legal Professionals.

He co-chaired the United Way campaign, is a senior fellow with the American Leadership Forum, and served on the boards of the Tacoma Community College Foundation and Tacoma City Club, among other community activities.

“Lindquist’s accomplishments as county prosecutor are still felt to this day,” the Tacoma Weekly said.  “He instituted innovative crime-fighting programs, significantly reduced crime, and on top of this, he brought bipartisanship, civility, and integrity to the job.”

A nationally-renowned author, his bestsellers include The King of Methlehem, published by Simon & Schuster, and Never Mind Nirvana, published by Random House. He also wrote a series of columns for the Tacoma Pierce County Bar News for local lawyers.

He also frequently speaks to the media and community groups about the law, particularly aviation cases, government negligence, including officer-involved shootings, and other wrongful death cases.

Please call or email to set up a free consultation. And there is no fee ever unless there is a recovery.