Career Criminals Off Our Streets 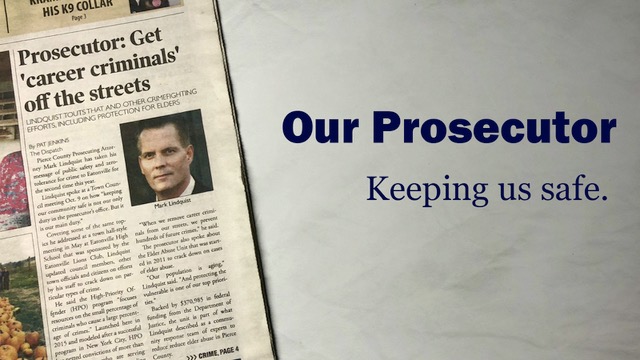 First published in The Tacoma Weekly.

He began his criminal career with a burglary in 2000. Before he turned 40, he racked up 16 felony convictions. Though he was versatile – stealing cars, committing identify theft and dabbling in drugs – burglary remained his crime of choice.

This year he went on a short crime spree, which included yet another burglary. Our new data-driven system identified him as a High Priority Offender (HPO) based on his conduct and history. He was charged, convicted and recently sentenced to several years in prison.

Your Pierce County Prosecutor’s Office is focusing resources on the small percentage of criminals who are committing a large percentage of the crimes. Some call them career criminals; we call them high priority offenders.

In almost every context, it’s a small group of bad actors causing most of the problems. This is certainly true in the world of criminal justice. That’s not new; that’s common sense. What is new is how our office uses data and technology to identify the worst offenders – the career criminals – and get them off our streets.

As part of our ongoing effort to keep our community safe, we began the HPO program in 2015. We studied similar data-driven programs on the East Coast, particularly in New York, and adapted the techniques for Pierce County. Consistent with the crime-fighting innovation we have demonstrated with our Elder Abuse Unit and gang sweeps, we are the first on the West Coast to implement this program.

The HPO program is based on three elements of criminality: rate, persistence and dangerousness. As a result, the focus is on those offenders who most impact our community.

Investigator Gene Miller, a former Tacoma Police Department detective, manages the data. As your prosecutor, I worked with Detective Miller on homicide cases and on the Tacoma Mall shooting. I have high confidence in him and in our program. We are not only reducing crime in our community, we are reducing bias in the system, because data is objective.

My confidence and enthusiasm for the program are shared by our partners in law enforcement. Using data to focus resources and improve public safety is cost-effective and forward-thinking.

High priority offenders average 11 prior felony convictions and more than three prior trips to prison. After conviction as a HPO, the individual serves a sentence that is nearly four times greater than the average sentence in Washington. And when you send a career criminal to prison, you prevent dozens of future crimes.

Why do we need this program when Washington has a three-strikes law? Because not all felonies are strikes. In fact, only “most serious offenses” are strikes. HPO applies to burglaries and other crimes that do not qualify as strike offenses, but still impact victims and our community.

Our future plan is to build on the success of this program by instituting a notification system. We want high priority offenders to know they have been identified. Our goal is to end their criminal careers. They can go to prison, or they can change careers. Either way, our community is safer.

Pierce County is booming. Population is up, crime is down. In fact, Felony crimes are down 18% since I became your Prosecutor. While crime is going up in Seattle and in Washington State, crime is going down in Pierce County. HPO program is one of the reasons.